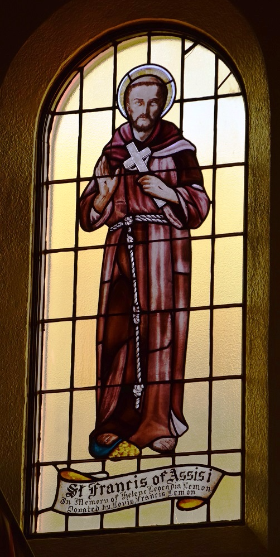 St. Francis of Assisi (1181 - 1226), was born in Umbria (central Italy). The son of a wealthy merchant, he renounced the carefree life afforded him to embrace extreme poverty and champion the message of Christ.

He gave up his inheritance, moved into a cave and spent his days evangelizing, tending to lepers, assisting the poor in their daily tasks and cleaning churches out of respect for the Eucharist. Soon, 11 men joined him in his work. The group sought to become a religious order, and in 1210 it was granted that status by Pope Innocent III. The order, known as the Friars Minor, eventually became the Franciscans. Its offshoots include the Poor Clares and the Capuchins. Francis was ordained a deacon in order to be able teach the Gospels, but in his humility he never sought the priesthood.

Francis was also a writer, and one of his best known works is ‘The Canticle of Brother Sun,’ a poem that praises God. Francis’s other endeavors included constructing what is believed to have been the first Nativity Scene, in 1223. He also was a lover of animals. Francis was known to preach to flocks of birds, and once talked a ferocious wolf out of terrorizing a village, according to accounts of his life in the popular book, “The Little Flowers of St. Francis.” It was Francis’s character to respect all of God’s creatures, and the statues of him often seen dotting today’s neighborhoods reflect that aspect of his personality.

Francis lost much of his sight in his later years, and was imprinted with the stigmata, or the wounds of Christ, in 1224. He died in 1226, at about the age of 45, and just two years later was canonized. St. Francis’s feast day is Oct. 4.

St. Francis of Assisi is the patron of animals, merchants, and ecology.

The window was donated by Louis Francis Lemon in memory of Helene Leoradia Lemon.