Our Lady of Victory 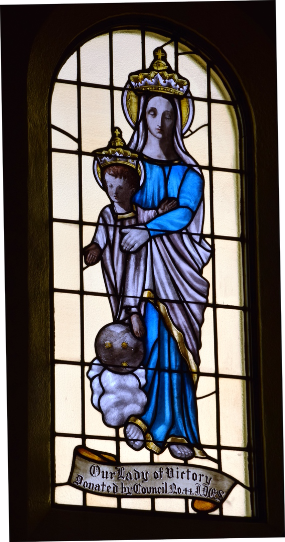 Devotion to Our Lady of Victory dates back to the Battle of Lapanto, on October 7, 1571. This was a naval battle in which a coalition of European Catholic maritime states arranged by Pope Pius V, defeated the fleet of the Ottoman Empire on the northern edge of the Gulf of Corinth, off western Greece. Lepanto is often called the “battle that saved Europe” because it halted the spread of Islam across the continent. The victory was credited to the Virgin Mary, whose intercession whose victory was implored through the use of the Rosary. The Battle of Lepanto became the feast day of Our Lady of Victory, later of Our Lady of the Rosary.

Her feast day is October 7.

The window was donated by Council 44 of the Our Lady of Victory Society (JDES).

10:00 AM on Sundays at Saint Brigid Catholic Church-Hanford CA

Or by appointment by

You can reach Father Joseph at: