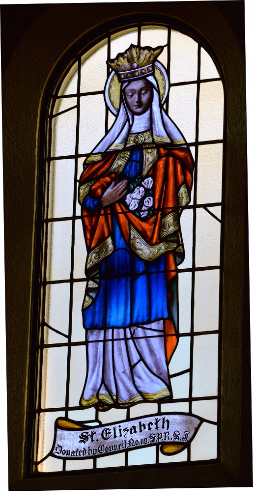 St. Elizabeth of Portugal (1271-1336), also known as Isabel of Aragon, was married to King Denis of Portugal and served the poor as a Franciscan tertiary.  Her husband did not approve of her works of charity, though.  Once, she was confronted by the king when she was carrying money to the poor in her apron. When asked what she was concealing, Elizabeth replied, “roses.” Upon opening the apron to show the king, only roses were to be found. For this reason, she is often depicted holding roses in the folds of her robe. She also acted as a peacekeeper between her husband and rival factions on two occasions, preventing civil war.

St. Elizabeth’s feast day is celebrated on July 4th.  She is the patron of Portugal, peace, queens, brides, victims of adultery, falsely accused people, and the Third Order Franciscans.

The window was donated by Council 118 of the Portuguese St. Elizabeth Society (S.P.R.S.I.).