The 18th century Spanish missionaries regarded the San Joaquin Valley as uninhabitable swampland, so they established no missions here. After citizens of the United States came to the gold country in 1849 and the years following, they began migrating and soon inhabited the south valley. Fr. Samuel Dade was the first priest to serve the new settlers in this region, establishing the parish of the Nativity of Mary in Visalia.

Beginning of the Parish

In the year 1886, Fr. Peter Aguilera from Visalia celebrated the first Mass in Hanford in a section house of the Southern Pacific Railroad Co. After that, Fr. Guerra of St. Mary’s Church in Visalia came to Hanford – or Mussel Slough as it was called then – monthly, to say Mass and baptize the parishioners until 1881, when the first Catholic Church was build in Hanford.

The church – named after St. Brigid of Ireland – was a small, wooden-frame structure build on the northeast corner of Seventh and Redington Streets. The chapel sat on two lots between two shepherd’s camps. This new chapel was dedicated on June 4, 1882 by the Most Rev. Francis Mora, the Bishop of Los Angeles and Monterey. 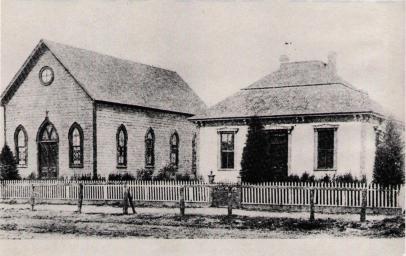 There is conflicting information about the date when St. Brigid’s received its first resident priest. Some reports say that Fr. Patrick J. Smith became the resident priest at St. Brigid Church in 1883, and in the fall of 1886 built a small frame cottage rectory beside the church for $1500. According to the history of the parish published in 1913 by Fr. Phillip Scher, Fr. Smith was not appointed pastor until 1886 after the rectory was built and St. Brigid’s was established as a parish. In any event, Fr. Smith was pastor until 1891 when Fr. Patrick Murphy succeeded him. Fr. Patrick Patrick Brady succeeded Fr. Murphy in 1894 and remained until 1907. During Fr. Brady’s pastorate, the church building was enlarged, providing a seating capacity of 300. The church at that time was valued at $7000. 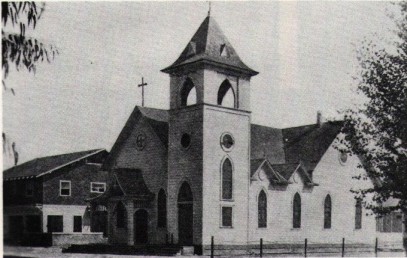 Fr. Brady talked about moving the church and had the Bishop’s support.

The church remained where it was, however, until Fr. Phillip G. Scher again brought up the idea of moving it when he arrived in 1911. Fr. Scher decided that since the small chapel could no longer accommodate his growing parish and since downtown businessmen were pressuring him to remove the church from valuable business property, he would rent the two lots and move the church.

Standard Oil rented the lots for use as a service station and the money was used to move the church 10 blocks to the corner of Florinda and Douty Streets. The site, comprising of 16 lots, was “in the heart of the best residential district of the city,” Scher said in a booklet published in 1913. The lots cost $8000. The rectory which Fr. Smith built in 1886 was destroyed and a new one erected for $6000. It was a two-story frame structure, “modern in every respect and fully equipped for all needs of the parish,” said Fr. Scher. Plans were set for the property to include five large buildings: a church, school, convent, rectory, and assembly hall.

The Catholic Church owned the property at Seventh and Redington Streets until the summer of 1920, when it was moved to Second and Douty Streets to make room for the present church at its location. The original building was renamed “Our Lady of Guadalupe” and served the Spanish-speaking parishioners on the south side of town.

During the first few months of 1927, architects made the drawings for the present St. Brigid Church. The Romanesque-style church would cover one city lot at Douty and Florinda Streets. The design was chosen to match Sacred Heart Hospital, next door.

Architects Swartz and Ryland of Fresno wrote a description of the church to Fr. Michael Stack, Pastor from 1924 to 1927: “It will have a seating capacity of about 700 people. The building will be constructed of masonry, stuccoed, with a light warm color on the exterior, and will also have considerable cast of ornamental stone work. The arch of three orders at the west portal will be in cast stone of refined detail, permitting a six-foot doorway leading into the vestibule, on the left of which is the office and on the right a baptistry.

“The back wall above the altar will have three beautiful stained glass windows, the side altars are placed below niches to hold the statues of the Blessed Mother and St. Joseph. The sacristies are spacious, fully equipped, and connected by an ambulatory.

“The aisles are finished in rubber tile. The pews are made of oak, the walls are tinted.

“The confessionals are located at the rear of the church, off the aisles. The building will be steam heated. The cost will be about $75,000 when completed. [It actually cost $65,545.] The parish house between the church and the hospital is to be remodeled to conform with the architecture of the other buildings of the group.” The church was furnished with four marble altars and a pipe organ.

Construction of the Catholic Church began on June 11, 1927. The cornerstone laying ceremony was on November 1, and the Most Rev. Bishop John B. MacGuinley, bishop of the Monterey-Fresno Diocese, presided at the event. The Mass was celebrated at the IDES Hall.

The contract for the building ended December 17, 1927, but construction was delayed because of the bad weather. St. Brigid’s was completed and Bishop MacGuinley dedicated the new church at a ceremony held on February 5, 1928. 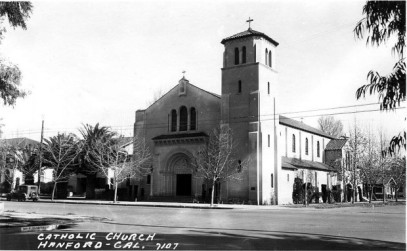 There have been 23 pastors of St. Brigid's. A list of them can be found here.

First serving mostly Irish and Portuguese settlers, St. Brigid Church was named after an Irish saint who exemplified Ireland's second Christian generation. Born a few years before St. Patrick died, St. Brigid founded convents and emphasized holiness of life. Her generation completed the evangelization of Ireland and prepared the way for the great missionaries who would later leave Ireland, bringing the message of salvation to other parts of Europe.